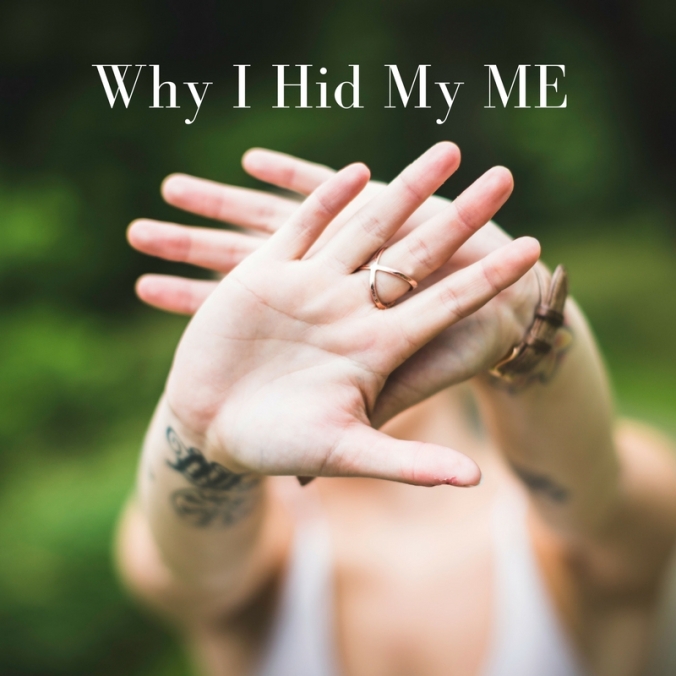 I’m taking you far into my past today to the time when I had just had Glandular Fever. I was all of 12/13 and I chatted with my friends via email (retro, I know but don’t knock the humble email) I had told them when they asked I had a bad case of tonsillitis which was true, what I had forgotten to tell them I was diagnosed with Glandular Fever shortly after, which was a shock for them when I didn’t return to school that term.

Eventually, I went back to school and had said it was glandular fever but I still couldn’t go to school full time. I started off with 2 days a week. A girl on the outskirts of my friendship group had glandular fever around the same time as me and had had a month off school compared to my three months. I remember thinking why wasn’t I back to normal?I caught every cold and just couldn’t get back on my feet. Fast forward to January and I was given the diagnosis of ME/CFS. To start with I told no one and I tried to hide my symptoms and my sheer effort to be present in school. Then because of the school, I needed teachers to know and the PE department started to give me grief so more people knew. I didn’t get that much sympathy from the teachers. Some were incredible and some were awful.

My friends had to know why I couldn’t do PE and why I sometimes was off for three weeks and then came back to school. It felt so personal and I was overwhelmed by all the symptoms I had and now knew weren’t right. The appointments I had, the confusion of being told different things by different doctors and I couldn’t keep up with it, let alone fill in my friends at the time. I was ashamed, embarrassed and felt like they would be thinking I was making excuses because I just didn’t want to be in school. I was all of thirteen and I’m pretty sure most people had no clue just how serious my condition was. I, funnily enough, couldn’t call it ME as it felt so permanent so I called it CFS for a few months. (read about why I call it ME here)

Also whilst I was out of school life moved on and I had to constantly start again with everyone trying to explain I was ill and couldn’t get out of bed. It sounded believable (not). My Mum happened to be friends with the Mum of one of my friends and she had been around when I was off really ill. When I came back to school the daughter in front of a lot of people said: “My Mum said you are really ill and that I should be nice to you and check on you through the day.” Whilst the gesture was kind and well-meaning, I wanted the ground to swallow me up. It was in front of people I didn’t know and the endless questions started most of the questions I would’ve loved to know the answers too. I became a topic of interest and my concealment was no longer an option.

I was ashamed and not dealing well with how much my world had been turned upside down. I didn’t know how to talk about my condition especially as at the age we were, weaknesses were used against you and gossip flew at lightning speed. Life was full of unsure times and darkness.

I don’t blame the people who once knew me, at the age we were it was too scary to face up to and deal with. We all lacked the maturity to deal with it, myself included. The friends slowly faded away and by my sixteenth or fifteenth birthday, I had not one friend. I didn’t blame them but I was lonely sometimes. Facebook was great to see what people were up to but at the same time, it became a taunt when proms and results days came around. I honestly felt like I had just disappeared from the world without a trace. Nobody noticed and nobody cared. In a strange way, I didn’t blame them.

In all honesty, it’s only been in the last 5 years I actually will talk about my condition freely and without trying to filter out the really ugly sides of my life. I found it for too personal to talk about it. Maybe that’s why some of my extended family struggle with it and my friends disappeared but I couldn’t do it.

Trying to cope with the symptoms, a life changed forever and the constant fires to put out just to get through daily life was enough. I hated to talk about the ME because it made it too real, too powerful. I just wanted to shut it out of my mind. With some help, I faced up to it and started to deal with the tragedy that had happened. I went from a nerd who was relatively active and liked to explore to a shell of a person in a wheelchair who couldn’t hold one of her beloved books any longer. That is a terrifying experience anyone would agree. One of my doctors told me the effects of the ME on my body were akin to being in a serious car crash, just without the broken bones and concussions. I was ‘meant’ to feel awful day in day out.

I guess sharing is caring and I just wanted to say if you are trying to hide your condition, I get it and I’ve been there and it was horrible walking around with this big secret all the time. If you know of someone with ME be that newly diagnosed I have some pointers for you.

Keep. Texting. Them. Even. If. They. Don’t. Reply. Do not take it personally if they don’t reply, don’t expect a reply. That one text of ‘Hi, How are you today?” Or “I saw this and thought of you” just might make their week and show the outside world cares still. We may feel terrible for not being able to reply, but it gives contact with the outside world.

Ask them what would help them. Whether if you can go round or pick up anything. If they need time let them be. Try not to be forceful or add extra pressure.

Don’t be disheartened when they cancel even if its last minute. They will loathe having to cancel. Be patient.

Send a card or a letter. That way they don’t have to worry about you having seen they’ve ‘read’ the message and they can get back to you when it’s possible.

Take your lead from them. If it’s all new and they are overwhelmed then give them space and time but don’t drop them and never contact them again.

Everyone is different so what works for me might not work for another. I just want to say hiding and being lonely is hard and if you are shut out then try to understand. You can’t force it either way whether you are ill or the friend of someone who is ill. Take your lead by them. It’s not easy but everyone hides it at a certain point. That’s why I feel like it is so important to talk, it’s amazing once you have a diagnosis the number of people who have been touched by ME/CFS. In the UK it is estimated that one in ten have ME and that is just the people who have been diagnosed. You can’t outwardly see it but when the conversation is opened hopefully it can help us raise awareness.

8 thoughts on “Hiding ME and Me”